My first impression of Dublin was that James Joyce was right. If any of you are familiar with his collection of short stories, Dubliners, you will know that he considered his home town to be dirty and overcrowded. Although I am convinced that life is too short to actually read anything by Joyce (Suzanne disagrees), we took a one-hour “walking Joyce” tour of Dublin. Now I am a Joyce expert. Our guide, the most earnest and serious Joyce scholar one can possibly meet, told us Joyce disliked his hometown.  Only nowadays there are, in addition to too many pedestrians, double decker buses the size of whale sharks in a mix already crowded with jackrabbit sized automobiles, and bicyclists. Furthermore, I am convinced that the Dublin Bus drivers are trained at Italian Taxicab driver schools. Bobbing and weaving, narrowly missing the tiny tidbit cars, bicyclists and each other, the Muhammad Ali wannabe bus drivers  appear to alarm no one except us white-knuckled tourists. All of this, mind you, driving on the “wrong” side of the street. However, after several days I grew to love Dublin primarily because of its people. Incredibly charming.  It’s difficult to explain, but they are so infectiously humorous,  so delightfully friendly and such an integral part of the cultural scene, it’s impossible to imagine one without the other. For example, Dubliners have hilarious nicknames for many of their most famous landmarks. See photo captions for examples. It’s not like one can overlook dirty and overcrowding, but it’s a packaged deal —  Funny and friendly filters filth.

Since we knew very little about Ireland, our first objective was to learn more about the Irish and Ireland. We spent an entire morning and afternoon in Epic, the Irish emigration museum. If you ever go to Dublin, don’t miss this interactive museum. I guarantee you will love it and learn a lot.
Pub Location notice:
Contrary to common belief, pubs are not located on every corner in Dublin. However, there at least two in every block.
Visiting one of the foremost literary capitals of the English speaking world we decided a play was in order.  The play was called the The Chastitute, by Irish playwright John Keane at the Gaiety Theater in downtown Dublin. A bit bizarre, The Chastitute’s overt sexuality would likely not be welcome in many  US cities. To me it represented the Irish struggle with a repressive Roman Catholic version of human sexuality. During our week in Dublin we also saw the National Gallery, an exhibition about my favorite poet, William Butler Yeats, The Book of Kells at Trinity College, its library, St Patrick’s Cathedral , Francis Bacon’s studio, at the Hugh Lane Gallery and Kilmainham Gaol.  Dublin done. 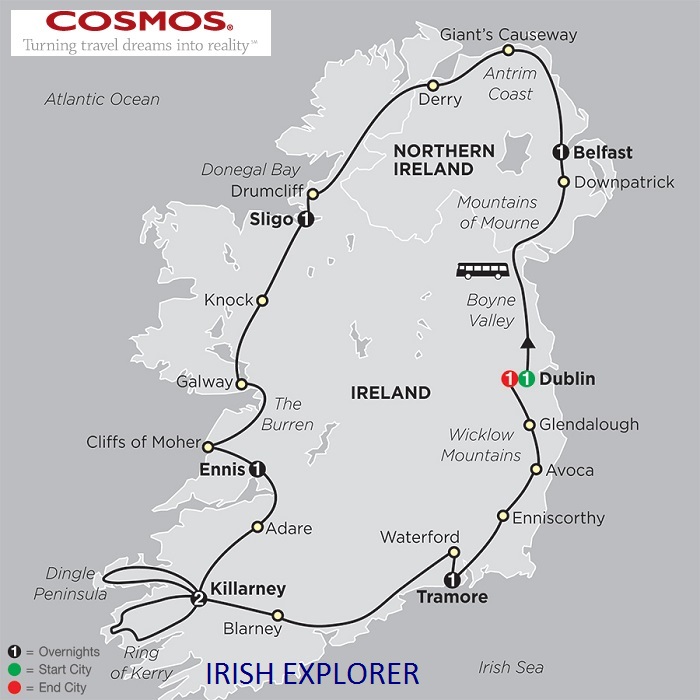 What can I say?  Look at the photographs and have portage included. Don’t do one of these tours without portage! it’s exhausting with it. Without someone else schlepping your luggage — deadly. We went from Dublin and back again basically following the Irish coast. (See map) We saw the breathtaking and unimaginably beautiful coast of Ireland and picturesque Old World countryside. Just in case you didn’t know, the Irish invented quaint and green.
The island of Ireland is divided into two separate and very distinct countries.  Northern Ireland, part of the United Kingdom, and The Irish Republic. It still appears, in spite of everything, after some 800 years , to be — ahem….politically sensitive. One only needs to recall the 1845-1852  Potato Famine to bring “sensitivity” info play which is to say nothing about the things Henry VIII, Elizabeth I, and Cromwell did to Ireland.  There are truly too many brutal English invasions to count.  During the Potato Famine over one million people starved to death, another million left their families and friends to emigrate to other countries but I’ve heard numbers as high as double that. According to our tour guide Ireland has yet to regain its pre-Potato Famine population. For the most part, the English, who ruled Ireland for 800 years, stood by with full bellies and watched the Irish starve believing intervention would only bring more Irish to the table. One no longer wonders why armed rebellion broke out against English rule in 1916-1921. In The Republic of Ireland this rebellion is  known as the Irish War for Independence.
My two favorite Irish cities besides Dublin are Belfast and Londonderry (Suzanne agrees), both of which are inside the UK. By the way, Londonderry is known simply as Derry to the Irish Republicans. It lies very near the border inside the UK. As we drove into Londonderry, we noticed a number of highway signs, for “Londonderry” with London scratched out or painted over. Another potential issue we heard time and time again was fear of the return to a “hard border” between the two countries as a result of Brexit.  For the moment people on both sides of the “soft” EU style border are peaceful and enjoying open access to both countries for a variety of economic reasons. The Republic of Ireland is the only country that has a land border with the UK.
Alex

This site uses Akismet to reduce spam. Learn how your comment data is processed.